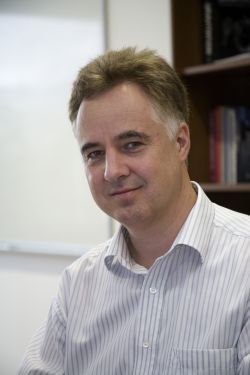 Hans Briegel’s research group studies models for quantum information processing and fundamental aspects of quantum information theory. One focus of the researchers is the theory of measurement-based quantum computation, which has resulted in a new and more thorough understanding of many-body entanglement as resource and applications in quantum communication, quantum error correction and quantum algorithms. The group also works on quantum phenomena in bio-molecular systems and studies the role of quantum mechanics for autonomous and adaptive systems. Some of the work is interdisciplinary and addresses questions in the fields of artificial intelligence and the philosophy of action.

Hans Briegel was one of the Founding Directors of the IQOQI and served as a Research Director from 2003 to 2014. In 2014 he and his research group moved to the University of Innsbruck.