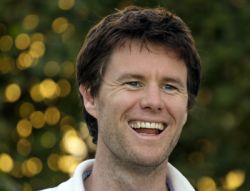 Experimental physicist Ben P. Lanyon, a member of Rainer Blatt’s Quantum Optics and Spectroscopy group, was awarded the most important and prestigious Austrian research prize for junior scientists: The START Prize is valued at up to 1.2 million Euro and is to support successful researchers to establish or consolidate their own research group.

This year’s START Prize was awarded this last Monday evening in Vienna. One of the awardees was Ben P. Lanyon from the Quantum Optics and Spectroscopy group, Institute for Quantum Optics and Quantum Information (IQOQI), headed by experimental physicist Rainer Blatt. Lanyon received the award for his project that is to solve one of the fundamental problems that arises when building quantum networks with ion traps: “Ion trap systems are the most easily controllable quantum systems we have at our disposal at the moment. That is why they are extremely suitable as interfaces for quantum networks. One of the key challenges is that photons are prone to absorption, which leads to undesirable losses,” explains Ben Lanyon. Moreover, communication between photons and other quantum systems is limited. Lanyon wants to develop new methods to overcome these problems and experimentally demonstrate the newly developed possibilities for ion quantum networks. “In the first step of the project we plan to develop a quantum interface, where the frequency of the single photons emitted from the ions will be converted to optimum frequencies suitable for the use in quantum networks,” explains Lanyon. “In particular, we want to demonstrate that this photon interface is a real quantum interface, where quantum entanglement between ion and photon is maintained.” The second goal is to use the quantum interface to distribute entanglement between matter and light over distances surpassing today’s records. “This will be achieved by converting the wave length of the photons to the standard wave length used in telecommunication networks. We want to observe entanglement going way beyond the 10 kilometer mark,” says Lanyon looking forward to the future. Realizing these goals will open new ways to connect ions with other quantum systems and will be an important step towards creating large-scale quantum networks.

Benjamin Peter Lanyon was born in Huntingdon, Great Britain, in 1981. He studied physics in Great Britain and Australia and started as a researcher at the University of Queensland in Brisbane, Australia. In 2011 he was recruited by Rainer Blatt as a Postdoc for the Institute for Experimental Physics at the University of Innsbruck. In 2013 he became Senior Scientist at the Institute for Quantum Optics and Quantum Information (IQOQI) at the Austrian Academy of Sciences in Innsbruck.