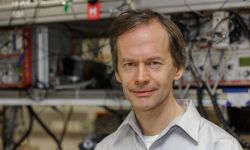 Christian Roos, experimental physicist at the Institute for Quantum Optics and Quantum Information (IQOQI) of the Austrian Academy of Sciences, has received one of the Advanced Grants conferred by the European Research Council (ERC). The grant provides Roos and his research team at the IQOQI with up to 2.5 million Euro for the next five years to build a new type of quantum simulator.

The development of quantum information processing has been progressing at a fast pace. Three decades ago it started with just a few ideas – today it has developed into a research field with a wide variety of topics. For example, in the laboratory experimental physicists developed the building blocks for creating a future quantum computer. Rainer Blatt’s group is one of the worldwide leaders in this field. However, a lot of work still needs to be done to build a universal quantum computer. Until then researchers will be using the unique properties of the quantum world for solving specific problems. Quantum systems, for example, are particularly suitable for stimulation and study of the properties of other quantum systems. Scientists have already been carrying out simulations successfully in experiments. However, the number of available quantum bits is still small so that problems can also be simulated with a conventional computer. In Innsbruck, physicist Christian Roos wants to develop a new type of quantum simulator to respond to this challenge.

So far the researchers in Innsbruck have used linear ion traps where the particles are assembled like on a string. “With this design we can control up to 20 ions really well,” says Roos. “The more particles we need, the more difficult the experiment becomes.” To overcome this problem, the physicists want to develop a cryogenic device to trap two-dimensional ion crystals. Roos‘ goal is to control up to 100 ions at the same time. “This device will enable us to enter a dimension where numerical simulations would be too elaborate to be carried out with conventional computers,” explains the physicist. In addition, with a two-dimensional system it will be possible to study physical phenomena that, so far, have been impossible to investigate with quantum simulation. Roos’ research team will use the funds from the ERC Advanced Grant to implement this new concept in the laboratory. The next step is to use it for specific simulations. “Our goal is to carry out simulations that are not feasible with the conventional method of numerical simulation,” says Roos. In Innsbruck, the researchers are provided with the best working conditions as teams of international theoretical and experimental physicists collaborate at the highest level.

Christian Roos was born in Germany in 1968. He studied physics at Georg August Universität Göttingen and earned his doctorate in Rainer Blatt’s group at the University of Innsbruck. After obtaining his PhD in 2000, he was a researcher at the Laboratoire Kastler-Brossel of the Ecole Normale Supérieure in Paris for two years. After working at the Institute for Experimental Physics at the University of Innsbruck for another three years, Roos moved to the newly established Institute for Quantum Optics and Quantum Information (IQOQI) of the Austrian Academy of Sciences (ÖAW) in Innsbruck, where he has been Senior Scientist in Rainer Blatt’s research group. Among other awards, Roos has received the Research Prize of the City of Innsbruck, the Otto-Seibert Research Prize and a Science Grant awarded by the Province of the Tyrol.