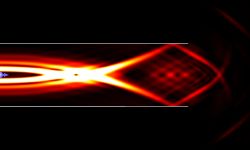 Physicists working with researcher Oriol Romero-Isart devised a new simple scheme to theoretically generate arbitrarily short and focused electromagnetic fields. This new tool could be used for precise sensing and in microscopy.

Microwaves, heat radiation, light and X-radiation are examples for electromagnetic waves. Many applications require to focus the electromagnetic fields to small spatiotemporal dimensions. Engineers may use different methods to achieve this. In the journal Physical Review Letters, researchers in Oriol Romero-Isart’s group at the Institute of Quantum Optics and Quantum Information (IQOQI) and the Institute for Theoretical Physics at the University of Innsbruck together with Ignacio Cirac and Theodor Hänsch at the Max Planck Institute of Quantum Optics, Munich, have published a new scheme for generating ultrafocused electromagnetic fields.

When electric current flows through a coil, it produces electromagnetic waves that propagate in all directions. When the coil is placed inside a cylinder that reflects the waves perfectly a surprising phenomenon happens. “With this setup arbitrarily focused pulses and quasi-equidistant pulses could be generated,” says junior scientist Patrick Maurer. “The more waveguide modes are excited, the more focused the electromagnetic fields become.” The theoretical physicists analytically characterized the system to such a degree that, based on the reflections of the electromagnetic waves on the inside of the cylinder, they were able to design a current pulse that excites a clearly defined number of modes. “Because of the specific properties of the system, the current pulse needs to be adjusted only slightly in order to change the number of modes or, in other words, to focus the field more strongly. The average frequency of the pulse basically remains the same,” explains Jordi Prat-Camps, Postdoc in Romero-Isart’s research team. The spectrum of the generated field is determined by the radius of the cylinder. For example, focused microwave pulses can be generated by using a cylinder that is several centimeters thick.

The physicists in Innsbruck were able to confirm their analytical calculations with numerical simulations. They showed that the fields kept their unique properties for some time after they exited the cylinder through one of the openings. This new concept is of interest for technological applications that require ultrafocused fields to work. For example, in the field of microscopy this new scheme could facilitate the development of even more precise devices. To implement their scheme, the physicists point out two requirements: “First, we need to find a material that perfectly reflects in a broad frequency range,” says Prat-Camps. “In addition, we have to precisely generate the calculated current pulse. The better these requirements are met, the clearer the visibility of the desired effect will be.”

This work is supported by the European Research Council and the Austrian Federal Ministry of Science, Research, and Economy (BMWFW).