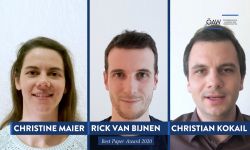 Christine Maier, Christian Kokail and Rick van Bijnen were awarded the Best Paper Award of the Austrian Academy of Sciences in an online ceremony yesterday. They received the award for a paper in the journal Nature, in which they together with colleagues presented a new method for simulating quantum phenomena.

Currently, many researchers are concerned with the question of how quantum advantage can be utilized on hardware that is already available today. With their new method, researchers led by Christian Kokail, Christine Maier, Rick van Bijnen and Christian Roos at the Institute of Quantum Optics and Quantum Information (IQOQI) of the Austrian Academy of Sciences have broken previous boundaries. They used a programmable ion trap quantum computer with 20 quantum bits as a quantum coprocessor into which quantum computations that reach the limit of classical computers are outsourced. They thus used the best features of both technologies: The quantum simulator handles the computationally demanding quantum problems and the classical computer solves the rest.

Christian Kokail completed his master's degree in technical physics at Graz University of Technology in 2016 and has been a PhD student at the Institute of Quantum Optics and Quantum Information at the University of Innsbruck since 2017.

Christine Maier completed her Master's degree in Experimental Quantum Physics at the University of Innsbruck in 2013. From 2014 to October 2020 she was a PhD student at the Institute of Quantum Optics and Quantum Information, in the research group of Prof. Rainer Blatt. Since November 2020, Christine Maier has been working as a Quantum Engineer at the company Alpine Quantum Technology in Innsbruck.

Rick van Bijnen graduated from Eindhoven University of Technology with master's degrees in Applied Physics and Industrial and Applied Mathematics in 2008. In 2013, he received his PhD in Theoretical Physics from Eindhoven University of Technology. From October 2013 to February 2016, Rick van Bijnen was a visiting researcher at the Max Planck Institute for Physics of Complex Systems in Dresden; from March 2016 to February 2017, Rick van Bijnen held a postdoctoral position at the Institute of Quantum Optics and Quantum Information at the University of Innsbruck (in the research groups of Peter Zoller and Francesca Ferlaino). Since March 2017, Rick van Bijnen is working as a Post-Doctoral Researcher at this institute in the group of Peter Zoller.

The Best Paper Award (Anniversary Fund of the City of Vienna for the ÖAW) in the amount of 4,000 euros is awarded to scientific staff members at research institutions of the Mathematical and Natural Sciences Class of the ÖAW for the best scientific paper - monograph or original article - published or accepted for publication in a peer-reviewed publishing house or journal in the year preceding the submission date.